After a quick dinner and trip back to the hotel we set out once again on a bus to see a bit of the City of Lights at night!

Here you see the Galeries LaFayette (a mall) with Christmas lights to mimic the stained glass of Notre Dame! 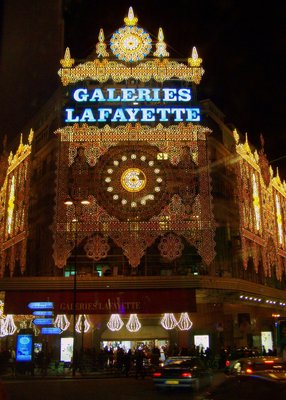 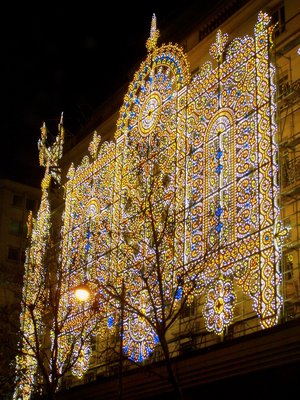 After a long bus trip, (traffic was horrible!) we arrived on the Champs Elysees.  This is the view back towards the palace. 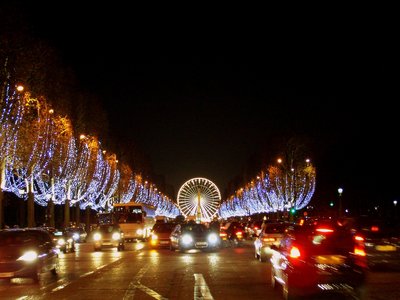 Yes this picture and the next were taken from the middle of the road.  It was a double cross walk and we stopped in the middle to take pictures.  I have to admit that it was just a little bit scary!

This of course is the Champs Elysees ending in the Arc de Triomphe. 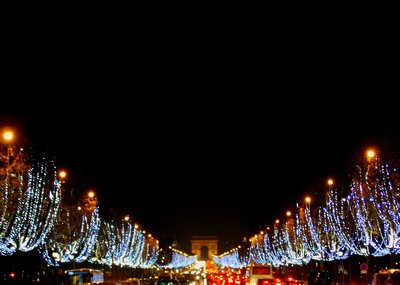 Mom and dad in front of one of the lighted trees… 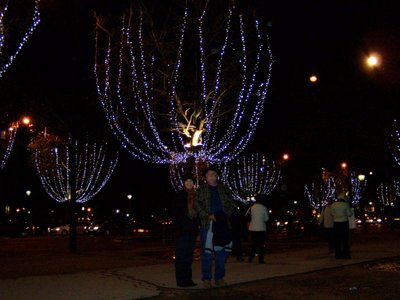 Ryan and dad on the walk… 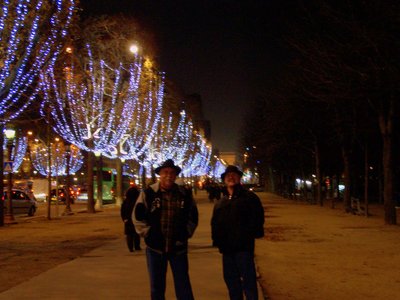 Ryan and I enjoying the stroll along the most famous street in the city of love!  🙂 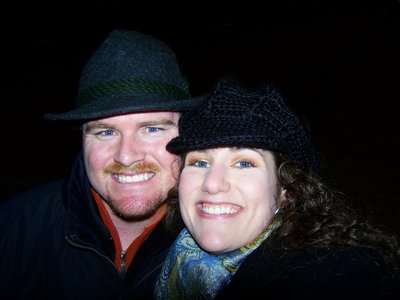 When we reached the halfway point of the Champs Elysees we could see the Eiffel tower alight! 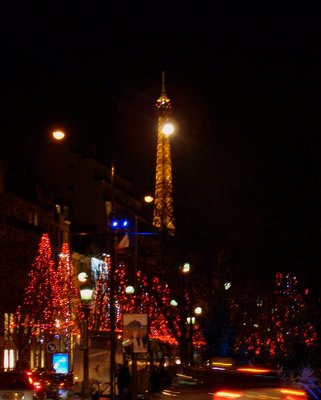 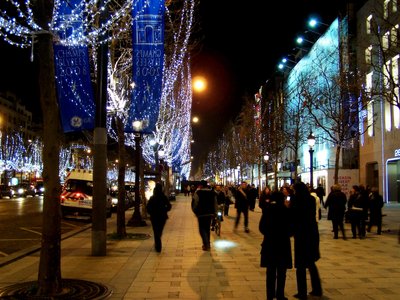 After we had finished our stroll we found our way to a metro station.  We decided that after the bus ride in we would rather try the metro to get to the Eiffel tower!  It was worth it!  There was no traffic… 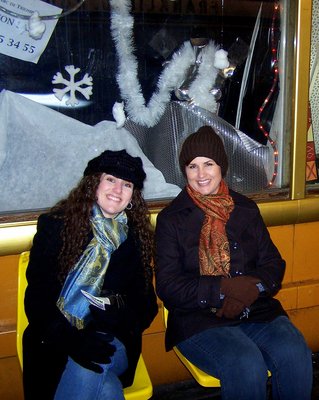 As we came out of the metro station across the river from the Eiffel tower this is the sight that met our eyes!  Amazing!!! 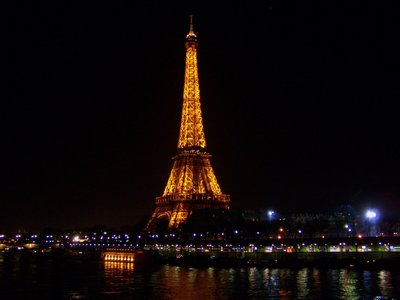 Mom and dad in front of the tower! 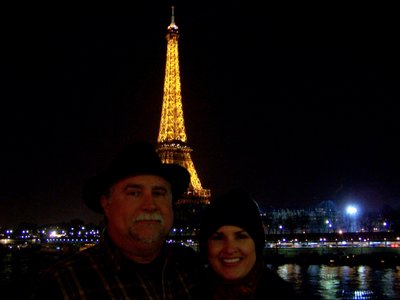 It was so cold on that bridge with the breeze blowing up off the water! 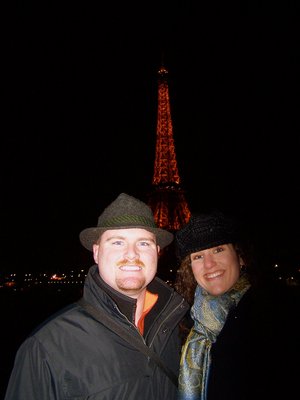 Every twenty minutes or so the whole tower lights up with strobe lights! 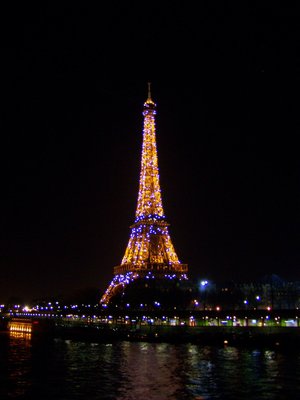 We strolled along the park until we stood, for the second time that day, under the Eiffel Tower.  We bought our tickets and rode the elevator to the top! 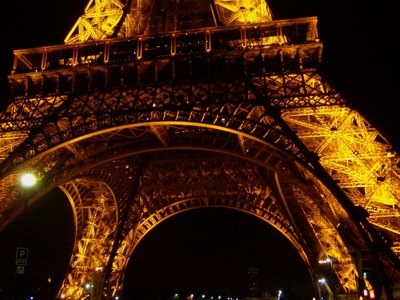 The view was stunning.  To be honest, the first time I was in Paris the Eiffel tower was the least interesting monument I visited…  After this trip I’m in love!  This was by far one of the most amazing memories I’ve ever made! 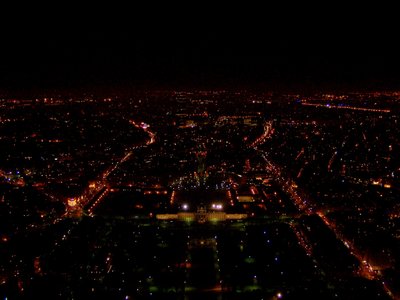 This is the Place de la Concorde and the ferris wheel at the end of the Champs Elysees. 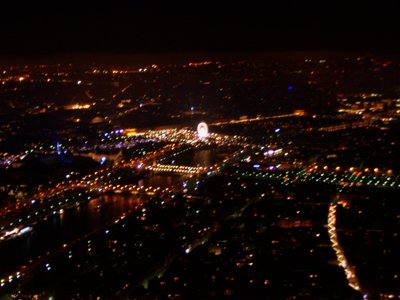 Invalides which is now a museum and the tomb of Napoleon. 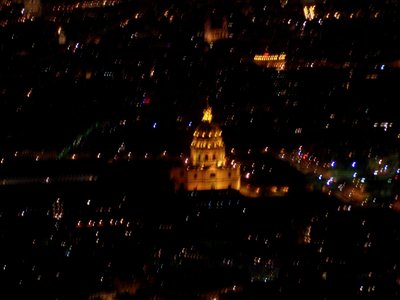 The streets of Paris… 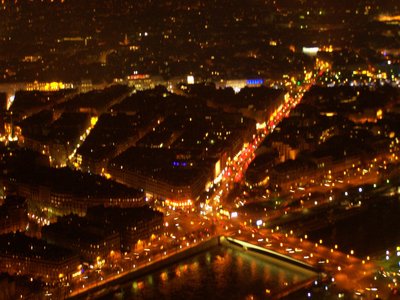 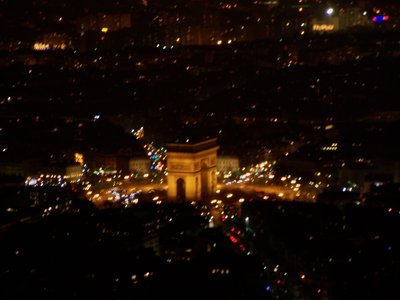 It was a clear and beautiful night…  we could not have asked for better! 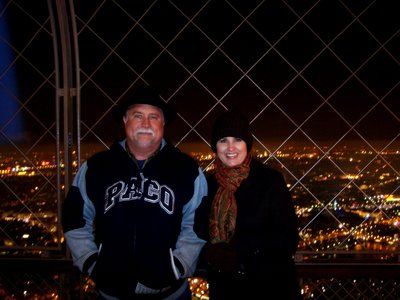 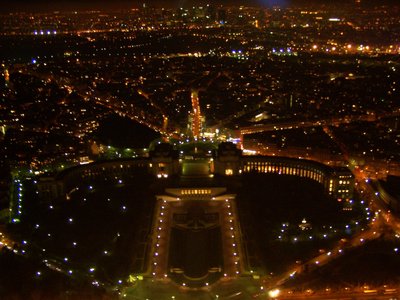 Let’s just say that the top of the Eiffel tower in Vegas does not even come close to doing this justice!!!  (We did that on our honeymoon over seven years ago and now here we are on top of the real deal… who would have thunk it?!) 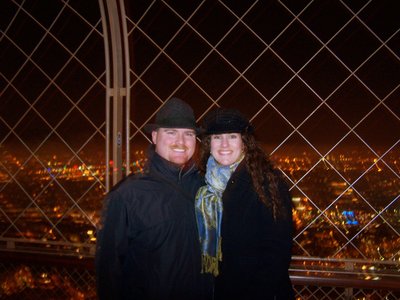 And as if being at the top of the Eiffel Tower was not enough… we also were privileged to witness a proposal!  My mother turned around just in time to see him drop to one knee and see her burst into tears and nod her answer.   We were the first to congratulate them and used their camera to take pictures of the occasion!  How romantic! 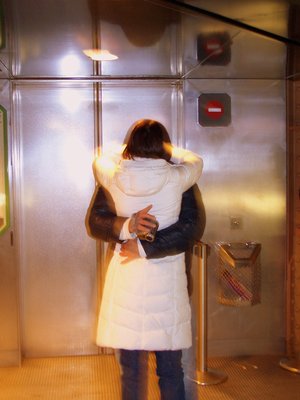 The Seine with the spotlight from the top of the tower… 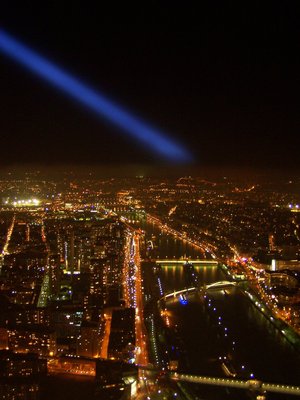 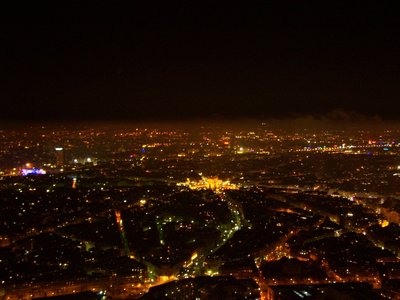 After a good long visit of drinking in the view we took the elevator back down…  It was the experience of a lifetime… something that I will never forget! 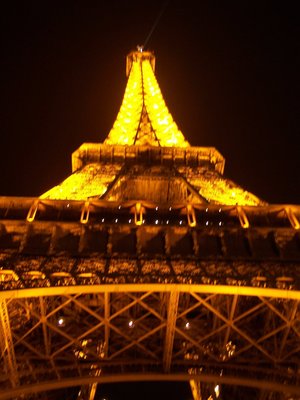 The next morning we braved rush hour in the metro and went to the Louve!  I’ll share that another day.